We are proud to present this new release of Edward Ka-Spel the Legendary Pink Dots frontman's solo improvisations recorded back in 80's and unreleased till now.

Limited to 100 copies. Each copy contains a unique download code on card to get this release digitally.
Cover by Alice.

Liner notes from the sleeve:
SIDE 1 The Berlin Sessions 1 & 2
The sound of Edward Ka-Spel lost in the Zone with synthesisers and effects units back in 1981, later developed a little, but never heard by the wider World in it’s entirety until now. There have been snatches revealed, on “Kleine Krieg” in particular but the full-on Kosmisch Attack was perhaps considered too indulgent for public consumption during the last 30 years.
Even so the session has a history. It was largely created in Conrad Schnitzler’s mighty music room in Berlin. EK stayed with him in 1981, ostensibly to make an interview for a fanzine (which sadly never appeared) and the great pioneer kindly gave him shelter for almost a week.
One night Conrad had a dinner appointment and invited The Pink Dots' singer to “do whatever he wanted“ on the synths and echo chambers scattered around the magical space.
It was the equivalent of 15 Christmases arriving at once. He indulged himself and recorded the results for posterity. Bless you Conrad…we all miss you!

SIDE 2 DEVASCAPE A - An Amsterdam Space Jam
From the vault, a slightly edited, enhanced session from EK on the Yamaha CS30 synthesizer from 1986. Hours of this material in fact remains unheard, but this was deemed worthy of a wider audience than the contents of a cupboard. 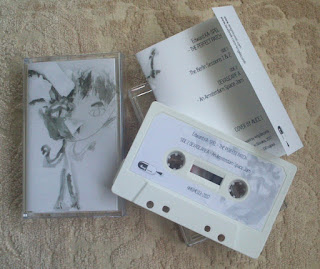